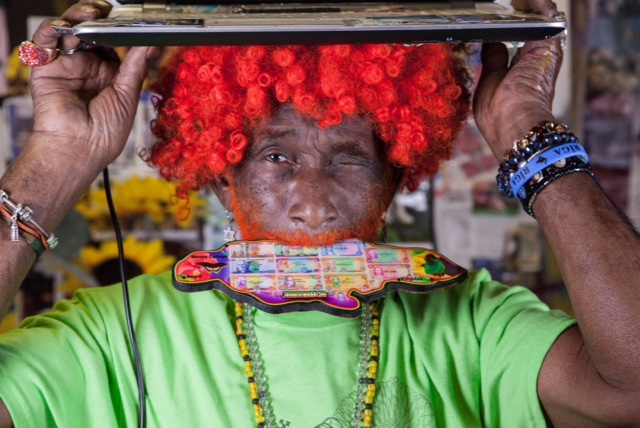 Young at heart reggae pioneer Lee ‘Scratch’ Perry performs at UK festival at the age of 80!

Lee ‘Scratch’ Perry turns 81 this year and is still showing the younger generation of MCs, rappers and sound technicians how it should be done!

The Jamaican legend kickstarted the careers of Bob Marley and The Clash.   Perry’s 1960s and 70s experimental sounds were pioneer to many dance, hip hop and big beat music genres we hear today.

How does the legend of reggae stay so young? How does Mr. Perry move like a man 30 years his junior?

As a vegan, Lee has a strict diet of vegetables and healthy foods. At an early age, Lee decided that eating meat was not for him.

We asked Lee about his views on eating meat and this is what he said:

“A healthy outside starts from the inside!

Animals are my friends and I can’t eat my friends.

You are what you eat so I am vegetarian and I am ageless.

So is it Lee’s vegan diet that makes him the Peter Pan of the music world or does he have another secret?

Veganism is a lifestyle that avoids all animal foods such as meat, dairy, eggs and honey; animal-derived products like leather; and, as far as possible, products tested on animals.

The Vegan Society’s formal definition is: “Veganism is a way of living which seeks to exclude, as far as is possible and practicable, all forms of exploitation of, and cruelty to, animals for food, clothing or any other purpose.”

Veganism is protected as a human right under Article 9 of the European Convention for the Protection of Human Rights.

Or is it water that makes Lee tick?

Lee’s next big festival gig, ‘A Celebration of Reggae,’ is in support of the charity WaterAid.

Lee feels water is essential to looking and feeling young.

We asked Lee about his views on water and he said:

Our Reggae Community Art Project at the festival will be in support of WaterAid. This is where Lee ‘Scratch’ Perry will draw some amazing creations, and then our community will then work on these pieces of art to create a community mural involving hundreds of people!

For logos, artwork and photos go to

Quotes from the team

Daniel Dobbie, promotor of ‘A Celebration of Reggae’ and owner of Angelfish LIVE events says:

“You have to meet this man to really believe it! He has been on the music scene as a pioneer of new sounds and beats for over 50 years and he is still going strong.”

At Angelfsih Live we love to make events that really inspire people to live life to the full. Lee certainly fits in with our production values “

Lee ‘Scratch’ Perry’s love for experimenting with beats, MC’s and his versatility in creating sounds away from traditional music is an inspiration to all musicians.

If you do what you love and with passion that’s all you can do. Lee’s creative flair and love for pushing boundaries should be an inspiration to use all.

“ Its an honour to have LSP at our festival. Not only has his music been an inspiration to millions but at the age of 80, he is proving to be an inspiration for all those wanting to stay young at heart’

Enjoy this amazing video of Lee working his magic at the famous Studio Black Ark over 40 years ago. If you have not got any time but want to hear some amazing vocals go the three minutes into the video where Lee records a magical male choir. Enjoy!

Perry worked for Joe Gibbs‘s at Amalgamated Records for a few years before creating his own label, Upsetter Records, in 1968. His first major single, “People Funny Boy,” sold well with 60,000 copies sold in Jamaica alone.

In 1973, Perry built a studio in his back yard, the Black Ark, to have more control over his productions and continued to produce notable musicians such as Bob Marley & the Wailers, Junior Byles, Junior Murvin, the Heptones, the Congos and Max Romeo. With his own studio at his disposal, Perry’s productions became more lavish, as the energetic producer was able to spend as much time as he wanted on the music he produced. Virtually everything Perry recorded in The Black Ark was done using basic recording equipment; through sonic sleight-of-hand, Perry made it sound unique.

Details on A Celebration of Reggae

A Celebration of Reggae 2017 – 3rd and 4th March, Cheese and Grain, Frome, Somerset

On 3 March, Lee Perry will be venturing out once more to headline at ‘ A Celebration of Reggae,’ one of the UK’s largest reggae music festivals in Somerset.

If you love the reggae vibes come along to our Somerset weekender and marvel at the great man’s staying power and wonder whether it’s down to the genes or the greens.

See for yourself when the man who defies the years headlines at a Celebration of Reggae weekender at the Cheese and Grain on Friday 3 March 2017.

This is a family friendly free event all day Saturday from 10am till 4pm. This includes DJ’s from our friends at Frome Dub Club,

Saturday will be amazing with great food stalls, kids area, community art in partnership with Wateraid, face painting and lots of dancing!

If you prefer the sounds of Bob Marley we have Legend performing lots of the classics on Saturday night.

Legends will be support by Troy Ellis and Friends. ( see other document for more details )

A Celebration of Reggae is a co-promotion with Angelfish LIVE, GM3 Music, SNG.

About our chosen charity WaterAid:

WaterAid’s vision is of a world where everyone has access to safe water and sanitation.  The international organisation works in 37 countries across Africa, Asia, Latin America and the Pacific Region to transform lives by improving access to safe water, hygiene and sanitation in some of the world’s poorest communities.  Since 1981, WaterAid has reached 25 million people with safe water and, since 2004, 24 million people with sanitation.  For more information, visit www.wateraid.org, follow @WaterAidUK on Twitter, or visit us on Facebook at www.facebook.com/wateraid.

There will be a collection in support of WaterAid on the door, and an opportunity to sign up as a volunteer for the charity at the event.

If you need more information on Lee ‘Scratch’ Perry’s secrets to a young heart, or you would like an interview to support your article do get in touch.

For logos, artwork and photos go to   https://drive.google.com/drive/u/0/folders/0B0z9sV9emw4LekVBTHhjc0liYzQ

Contact Details fro Daniel Dobbie and his team at AngelfishFILMS and AngelfishLIVE: